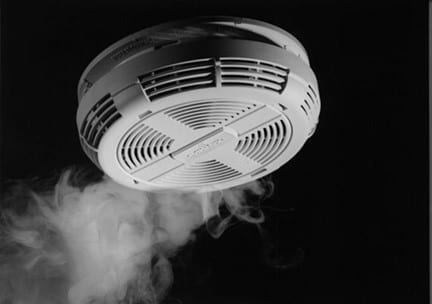 False smoke alarms can be as damaging as not having one at all.

No smoke alarms were found inside a Park Ridge home in which a morning fire broke out officials say.  Fire extensively damaged the rear addition of a house. Firefighters found heavy smoke and flames shooting out of the back and north side of the single-story addition. Two women who lived in the home were able to get out before firefighters arrived.  A search of the two-story brick house and rear addition found just one smoke detector on the second floor. It wasn’t working because it didn’t have batteries.

A man died following a house fire in the Chicago Lawn neighborhood Tuesday afternoon that apparently was caused by careless smoking, authorities said. Crews were called to the home and took one person who had been in the home in critical condition to an area hospital, where he later died.  There were no smoke detectors in the home.

Recent news articles like these two show the critical importance of smoke detectors. These alarms can mean the difference between life and death in a fire. Working smoke alarms decrease the chance of dying in a fire by half. Smoke alarms detect and alert the presence of fire in its early stages therefore giving people time to escape safely.

Connect your smoke detector to your burglar alarm

Some of our clients have opted to have their smoke detector connected to their burglar alarm system. If the smoke detector goes off, an activation signal is sent to our alarm monitoring station, following the same emergency procedure as a burglar alarm. Although you can’t control the when, you can always ensure your smoke detector is working properly. Listed below are 6 tips that help reduce false smoke alarms.

Clean all smoke detectors in your home at least twice a year.

Airborne dust and contaminants can interfere with a smoke alarm’s ability to detect smoke and/or set a false alarm. Alarms may look clean, but dust can accumulate inside the cover, especially in newly built homes. Gently vacuum smoke alarms regularly using the soft brush attachment.

Strong chemical odors like ammonia or paint fumes can set off a smoke detector.

Don’t wait for that high-pitched chirp to take action. Instead, keep a standing annual date with yourself for replacing the battery in each of your smoke alarms.

The National Fire Association recommends replacing it every ten years. However, an old smoke detector can trigger false alarms. If you have already changed the batteries and your smoke detector is still beeping, it should be replaced right away.

Learn more about your alarm type and what triggers it.

If you would like to learn more about this or to add a smoke detector to your current alarm system, please contact us at 773-388-1208 or sales@vintechnology.com

How to Safely Escape a Home Invasion Part 2

Last week, an elderly woman and her son were murdered during a home invasion in…

Why You Should Be Aware of Lock Bumping